The Magic School Bus
Under Construction

"When do they learn to pick up after themselves?"
—Mrs. Li

Under Construction is the fourth episode of the third season of The Magic School Bus. It is about structures.

The class is going on a field trip to the new suspension bridge that's being built. However, there is a problem. Mrs. Li (Wanda's mother) needs Wanda to watch her little brother, William, until she gets off her business call. The class decides to watch him together. He, only a toddler, accidentally uses the portashrinker to shrink the entire class (minus Liz) and the bus and locks them in the bathroom. They uses the materials available to build structures to escape.

At Wanda's house, Wanda is asked by her mother to keep an eye on William since the magazine changed the time of the telephone meeting in the last minute. So Wanda decides to take William along with her on a field trip to the suspension bridge that's being built.

She arrives onto the bus and Ms. Frizzle arrives with the rest of the class and they go inside Wanda's house. Liz makes a block tower for William, who tears it apart after he pulls Liz's tail and causes the lizard to run into it. The class decide to build a new tower for him and William tampers with the port-a-shrinker. The class struggle to keep the blocks up and the tower eventually falls over. They notice that William has the port-a-shrinker and the toddler ends up shrinking the class down to size. He also ends up shrinking the bus as well and things get worse when William steps onto the port-a-shrinker, destroying it completely. So the class run inside the bathroom and Liz is left to care for William. Dorothy Ann comes up with the idea to make a human tower to reach the doorknob. But Carlos reminds the class that without foundation, they would topple over, just like the tower of blocks. So he comes up with the idea to start with three on the bottom. Unfortunately, they aren't tall enough to reach the knob. So Wanda decides to climb out the window, in which the class should build a tower to get onto the toilet, built one to get on top of the sink, and build a bridge to get across the tub and to the window.

So the class build a pyramid and use the hair rollers to build a tower on top of the pyramid. Little do they know, the dog has grabbed The Magic School Bus and taken it to William's bedroom, to which William plays with it, calling it "Bussy". They successfully make the tower to get on top of the toilet. Wanda is the first to climb on top and slip on the toilet seat, holding on to the edge to try to keep herself from falling in.

The class then learns that Wanda's mother only writes what she knows, which includes an alligator in the bath tub. Wanda uses the mirror cabinet for more material, using the dental floss to get across the tub and a pin for a hook. Wanda slides through the floss and to the window. The rest of the class decides to suspend the bridge and uses more floss and some bandages to make a suspension bridge as they get across. They end up onto a window seal and slide down the water spout. Meanwhile, Liz tries everything she could to take The Magic School Bus off of William. She soon digs through William's toybox to find an actual toy vehicle and finds a truck, prompting William to swap The Magic School Bus for the truck, calling it "twuck". Liz then brings The Magic School Bus outside right on time for the rest of the class to grow back in size using The Magic School Bus.

Wanda runs back inside her house and in William's bedroom and Mrs. Li, having finally finished her business call, lets her join the rest of her class to take a trip to the construction site. After Wanda leaves, Mrs. Li discovers the broken port-a-shrinker and tosses it inside the toy box, oblivious to the fact that the port-a-shrinker has caused the toy box to shrink in size. 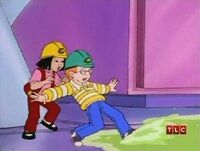