Host of Is This the Magic School Bus?

Rocks and Rolls is the twelfth episode of the third season of The Magic School Bus, about erosion.

It's Walkerville's centennial, and the town founder's great-granddaughter, Ashley Walker-Club Dupree, is hosting an event where Arnold will present the statue he and his class carved of the founder, Captain P. Walker. The catch is that it must not have been carved by hand. While the class is making the finishing touches to the statue, Ms. Frizzle comes around and tells Arnold that nothing is forever, not even rock. Arnold, however, disagrees, arguing that rock is permanent. Ms. Frizzle notices a crack through one of the rocks and Arnold states that water can't break rock. The statue then breaks away from where it was attached, by rock, to the mountain.

Ms. Frizzle then takes the class to the bus and transforms it into a boulder. The bus tumbles down the mountain and finally stops to the edge of the river. The class exit the bus to retrieve the statue, only to find that half of it is missing. They are amazed of how water could possibly start such a rockslide. When the water washes the dirt from under the statue, Arnold tries to suppress this, only for the statue to fall into the river and float away, knocking into the other rocks and breaking one of its arms. When Arnold watches the statue about to approach a waterfall, he climbs the overhead branch of a tree and uses Liz to grab the statue, only for the two to end up going down the waterfall in the process.

Arnold and Liz are caught in a net and hoisted back inside the bus. Arnold watches in horror as the statue plunges down the water. Ms. Frizzle thrusts the bus down the waterfall and as it ends underwater, it gets caught in a rolling turbulence right before getting stuck between more rocks underwater. When Ms. Frizzle mentions water erosion, Dorothy Ann reads in her book that water erosion is what happens when rocks get worn away by water. Arnold then learns that the statue is eroded and they come across the statue underwater. They find that the nose is almost gone and Carlos jokingly states, "No nose is good nose". Arnold can't believe water was the reason it gave way. The class is dressed in rock suits and they exit the bus to retrieve the statue, much to Ralphie's dismay, even going as far as to saying he "should've stayed home today", only for another boulder to hit it with enough force to send it away again. They finally come to a complete stop behind a stationery rock, only to take a glimpse of another boulder coming towards them.

Ms. Frizzle uses the bus to pick up the class as they make their way inside. When they take off their rock suits, they notice how the water eroded them, thus making them appear smaller than before. When the class find that the statue is reducing to nothing, Liz transforms the bus into a raft that floats overhead. The class realizes that the water is slowing down and the big rocks are absent. Carlos states that no rock has a chance since it falls down a mountain, plunges over a waterfall, and is pushed along the bottom of the stream. The class then notices that the rocks that slide down the bottom of the mountain have dammed the stream, stopping the statue. As the class approaches it, they grab it and also comes across the horse as well. Arnold becomes distraught and Keesha sees that the ceremony is right below, with Mrs. Walker trying to stall the audience until the class arrives. Things get worse when people begin to leave the ceremony. When Keesha sarcastically states the class should "break open the dam and have the water wash the class down to the ceremony, Ms. Frizzle gets an idea and Arnold remembers how the ice made the statue break away from the mountain. The class then learn that they have to get water into the crack of the dam. Keesha pours water into a crack in one of the rocks and Liz activates the freezer of the bus to split the rock. The dam then breaks and the class enter the bus to take a ride through the water, creating a stream to the ceremony. Arnold tries to explain the incident to Mrs. Walker, only to learn that the class have made a stream down the mountain. In the end, the water erosion caused by their fall carved the mountain to look like Captain Walker, his wish of having a statue not carved by hand fulfilled. The hair was formed when the ice cracked the rock connecting the statue to the mountain and the statue fell, the stream carved the outline of the face, and the nose and eyes are rocks piles pushed there by the water in the stream. The only work the class did was the beard, caused by cracking open the dam and causing the flood that brought them to the ceremony. Therefore, Captain Walker is the symbol of the power of water, which Arnold finally believes is stronger. 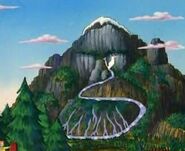