Janet the Soul Crusher (by Ralphie)
The Tsar of Sarcastic
Cuz (by Arnold, sometimes)

The Baroness of Bossy The Princess of Pushy

Carlos, cheerleaders, being the best, her autobiography, collecting paperclips, Arnold's soft side, bragging about her grades

The Magic School Bus Lost in the Solar System

Janet is Arnold's 12-year-old know-it-all paternal only cousin who tends to brag a lot.

Janet is Arnold's abrasive, stubborn, arrogant, know-it-all cousin who tends to brag about how she can be better at anything. She most often tries to sabotage the class in some way to gain something for herself. She initially appeared in the book The Magic School Bus Lost in the Solar System, where it was stated that she went to another school. In The Magic School Bus and The Magic School Bus Rides Again, she visits from another class at the same school. She owns a blog called TheaterBuzz, where she reviews Walkerville plays, such as the Frizzle renditions of classic fairytales. She has also written an autobiography called Janet Perlstein: The Untold Story Finally Told and has had it published, similar to Tim's The Adventures of Weatherman. She is knowledgeable in optical illusions, and can perform Pepper's Ghost.

Janet's appearance is, in many respects, a lot like her cousin, Arnold. They both have red hair, but Janet has blue eyes instead of green eyes. She also wears attire similar to his and the same colors, except with short sleeves, and a skirt. She has her initial, J, on her shirt (similar to Ralphie). Her glasses are pink with oval frames. She wears yellow and white striped socks and blue Mary Janes. Her signature colors are blue, green, and yellow like her cousin.

In the computer games in her only appearance in The Magic School Bus Explores the Solar System, her hair is blonde and her glasses appear about the same style but in red.

In Works Out, she wore a golden yellow hooded jumper with the letter J in blue, golden yellow trousers, and red and white sneakers. x In Gets Swamped, when she rode on the Bus with Prof. Frizzle's class to see how swamps are important, she wore a yellow rain hat, a blue rain coat, and yellow gumboots. To differentiate her with the Frizzle class, instead of the Walkerville icon on her coat, her "J" logo is depicted on the coat.

In Rides Again, her hair looks straighter (even though Janet's Mystery Gene reveals she still has curly hair) and longer, her glasses are now more square-shaped like her cousin's, and her yellow and white striped shirt is replaced with a fully green shirt. She retains her blue skirt from the original series to which she sometimes wears black shorts underneath, and brown ballet flats. She has freckles (Season 1) and no freckles (Season 2).

Janet's first appearance is in "Gets Lost in Space". She starts off as an insufferable know-it-all who constantly brags and redeems herself in the end when Arnold freezes himself to demonstrate what would happen if she stays on Pluto. When his head freezes, she becomes shocked (and gasps, "OH CUZ!"). And she and the class then immediately carry him back into the Bus. This is her only appearance in season one.

When she returns in "Butterfly and the Bog Beast", she's back to her old manipulative self, but she's more despicable than before. She successfully turns the class against Phoebe when she points out they're playing her old school in soccer that afternoon, but at the end, she sees the error of her ways. This is her only appearance on season two.

Despite redeeming herself in "Butterfly and the Bog Beast", Janet is back to her former self in "Gets a Bright Idea", where she uses Arnold to trick the class in order to prove that a magic show would have been a better class trip than a light show. Arnold isn't too happy when he realizes she was using him for her own personal gain, but he seems to forgive her at the end, laughing off the whole thing. In "Works Out", she has no moment of redemption, though Mr. Sinew, who she was supporting in the Teacher Triathlon, congratulates Ms. Frizzle for winning. She has a brief appearance in "Goes Upstream", her last appearance in season three.

Janet's next major role isn't until "Gets Swamped", when she's debating Carlos on whether or not a new mall should be built on the wetlands. If not for the flood, she would have been successful in getting the town to vote yes on the mall. She has another brief appearance in "Sees Stars", Arnold showing embarrassment when he sees that she's the one who buys the star the class wanted to get Dorothy Ann for her birthday. In "Makes a Stink", she deliberately sabotages the class when they make a fantastic smell for the scent competition. Like in "Works Out", she doesn't have a moment of redemption. 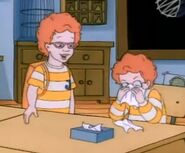