The Magic School Bus
In the City

In the City is the twelfth episode of the fourth season of The Magic School Bus. It is about urban wildlife.

The class goes on a "normal" field trip to the zoo and learn about animals in the city. Tim states that foxes won't live in the city on their own if not for the zoo, and Dorothy Ann reads in her book that peregrine falcons are cliff dwellers who catch and eat other birds. When the zoo begins to close, the rest of the class searches for Ralphie and Wanda, who are watching opossums hanging from a tree branch by tails. Things don't stay normal for long when Ms. Frizzle comes around via The Magic School Bus and the students enter The Magic School Bus. When they explain to Ms. Frizzle that it is not feasible for zoo animals to live in urban habitat, Ms. Frizzle changes them all in to city animals (Tim, Arnold, and Phoebe are foxes; Ralphie, Wanda, and Keesha are possums; Dorothy Ann and Carlos are falcons, and Ms. Frizzle is a raccoon). They hide from the passersby and attempt to enter The Magic School Bus. But when The Magic School Bus, which turned into a bear, wanders off, the class attempts to go after it. Carlos and Dorothy Ann fly after it and The Magic School Bear is on its way downtown. Carlos and Dorothy Ann inform the rest of the class this and they split up on a search for The Magic School Bear. Phoebe, Tim, and Arnold notices an opossum crossing the road without looking the slightest bit worried and eats an apple core from the garbage. Just then, a dog whose owner called him Jake breaks free from his leash and chases after the fox-transformed students.

The children hide inside a shed and Jake's owner finally catches him and takes him home with him. Just then, a plant pot spills and a raccoon emerges from behind it, much to the students' confusion. The raccoon devours the worms from the soil and the students exit the shed to meet the rest of the class outside. Dorothy Ann and Carlos then fly away to search for the bus and find night hawks flying below devouring moths. Carlos attempts to eat one of them. But Dorothy Ann stops him and the two continue searching through the city. They rest on top of a skyscraper and Dorothy Ann quotes Ms. Frizzle's line, "One person's skyscraper is another falcon's cliff".

Meanwhile, Arnold runs through the city to search for food and the rest of the class follows suit. They end up in the alley and some humans spot The Magic School Bear which appears to be a normal bear in the alley. While they attempt to call someone, the rest of the class approaches The Magic School Bear and spots rats, who are scared away by an opossum. The opossum eats from the trash bag and the class eats out of the garbage themselves. Arnold finally concedes that maybe some wild animals can survive in the city and Phoebe and Tim continue to search for the bear-transformed Magic School Bus.

Things escalate when animal control is looking for it. If the class doesn't get to it in time, they'll remain city animals forever. Meanwhile, Dorothy Ann and Carlos search for the bus themselves while flying above the city and the rest of the class navigate through the train tracks. They spot a fox scampering up the hill and the class follows it. They find that the fox has a spouse and babies, who they feed dead animals to, inside a local graveyard and hide just in time to spot the zookeepers searching for the bus transformed into a bear at an attempt to tranquilize it and take it to the woods. 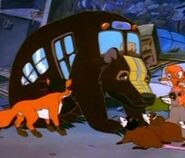