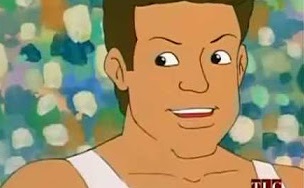 Garth Sinew is the strong bodybuilding P.E. teacher at Walkerville Elementary. He only appears in "Works Out" as Ms. Frizzle's toughest competition in the Teacherathalon, and the episode's main antagonist.