Dorothy Ann "D.A." Rourke is a student at Walkerville Elementary. She was voiced by Tara Meyer in the original TV series and by Gabby Clarke in The Magic School Bus Rides Again.

Dorothy Ann is the class bookworm, always looking for a fact in one of her many books. She loves astronomy, and she has a telescope on the balcony outside of her bedroom. She gets a new, high-powered one for her ninth birthday in "Sees Stars." She also has an interest in physics. She tends to have an argumentative personality and has clashed with the others from time to time, most notably Wanda ("Takes A Dive"), Ralphie ("Plays Ball"), and Carlos ("Blows Its Top" and "Makes a Rainbow").

For sleepwear, in "Out of This World", she wore aqua pajamas with violet slippers. But in "Sees Stars", her top pajamas have purple fringes and a pink and violet shooting star, and she also wore pink slippers.

For winter wear, she wears a green hat, her violet turtleneck, her turquoise skirt, a pink jacket, rose trousers and violet boots.

For beach wear, she wears a one piece violet swimsuit with a blue lining and a violet pleated skirt.

For rain wear, she wears a turquoise rain hat, a violet raincoat, and turquoise gumboots.

In the new series, she has her hair tied in a high ponytail held with a violet hair tie with light pale skin, blue eyes. She wears a pale and light purple shirt, a light violet blazer, pale blue trousers, and orange ballet flats. She retains her old signature colors.

Dorothy Ann is introduced with the rest of the class in "Gets Lost In Space," but her researching habits are not shown until "For Lunch." Her first focus episode is "In the Haunted House" in which she's conducting the class as they perform her "Concerto for Invented Instrument". She's seen doing a chemistry experiment while the class bakes Ms. Frizzle a birthday cake in "Gets Ready, Set, Dough." Her last focus episode of the season is "Plays Ball". Excited to show off her new physics book, she's disappointed when the class only cares about the baseball game they were playing. She's even more disappointed when Ralphie leaves her book on the field, but they end up inside it, playing a friction-less baseball game.

The season opens with a Dorothy Ann-focused episode, "Blows Its Top." She and Carlos argue over discovering a new island until she loses her books to the ocean. Feeling lost and empty without them, she begs Ms. Frizzle to help her get them back, "Please, Ms. Frizzle! I'm nothing without my books! Me, books...books, me!" In "Butterfly and the Bog Beast", her mascot suggestion is a broccoli, and despite her choice of mascot, she sides with the others against Phoebe's butterfly idea. She speaks on "behalf of the court" during Ms. Frizzle's trial in "In a Pickle," and she's embarrassed by Carlos' little brother, Mikey, when he brings up a heat rash she once got in "Getting Energized". In "Out of This World", she discovers an asteroid bound for Earth, more specifically, Walkerville Elementary and she gets the class to help her destroy it.

In "Show and Tells," Dorothy Ann and Arnold are representing Walkerville in the 10th Annual International Show & Tell Competition, and after researching Arnold's rare pumice collection, she's upset that he opted to bring an artifact she knows nothing about. She fights with Carlos again in "Makes a Rainbow" over her book, (he says it's purple while she says it's violet), and which is bad enough for Wanda to comment, "This could get ugly." She's made a rainforest investigator with Tim as her assistant in "In the Rainforest" when they try to find out why Ms. Frizzle's cocoa tree didn't yield a good harvest.

Mr. Ruhle puts Dorothy Ann in charge of taking care of his pet Rhode Island Red rooster, Giblets, in "Cracks a Yolk," but she loses him once his master is gone. She celebrates her birthday in "Sees Stars," in which the class goes on a field trip before getting together for her small party to find her a star as a gift. As she was sick, she stayed home, but Liz is with her, eating cake and looking in her new telescope. She and Wanda butt heads in "Takes a Dive" when she wants to work as partners, but Wanda wants to go solo.

In "Hides and Seeks", she becomes determined to outwit "The Seeker" in a game of extreme hide-and-seek. In "The Tales Glaciers Tell", she is selected to be a storyteller, when all she can think about is gathering data and numbers. She panics when her FrizzTab gets broken losing all of the data she was gathering.

Dorothy Ann's parents both appear in "Going Batty" and "Rocks and Rolls", and her mother appears again in "Out of This World". She has a little sister named Evan, who is blonde like her and their mother. Her parents also appear in a flashback in "The Tales Glaciers Tell", where they are revealed to be wonderful story tellers, and they appear in present at the presentation at the end. 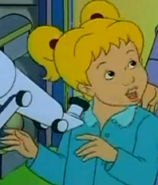